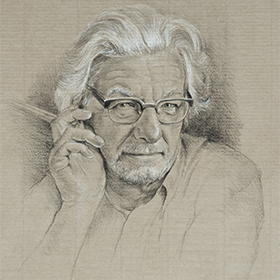 A life dedicated to art

Jef Van Grieken was born in Herenthout, Belgium, on July 29th 1950. He studied at the art academy of both Antwerp and Mechelen and obtained a Master Degree at the Higher Institute of Antwerp. Since 1975 Jef van Grieken participated in several national and international exhibitions.

He has given 'lectures-demonstrations' at the Smithsonian Institute (Washington, 1986). Other large exhibitions of his work were held at The Fine Arts Musueum, the largest modern art museum in Asia (Taipei, 1991) and the Curaçao Museum (Willemstad, 2002).

His work can be admired in several belgian musea, banking institutions and also for example in Brussels National Airport and in the Brussels Royal Library. Van Grieken's art is to be found in musea such as the Museum of Nürnberg, Taipei and Royal Fine Arts Museum Antwerp and in private collections in Colombia, Brasil, Mexico, the USA and Saudi Arabia, just to name a few.

In his career, Jef Van Grieken has been rewarded with the prize for 'Jonge Belgische Grafiek' (1978), The Grand Prize of Kortenberg, the first prize at 'Belgica-150' (1980) and he received a reward at the Nürnberg Bicentennial for Drawing Arts.